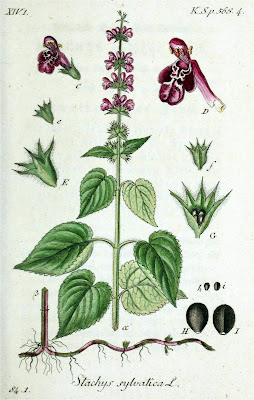 Stachys is one of the largest genera in the Lamiaceaeplant family. It is a genus of about 300 species and a subfamily of Lamioideae. The distribution of the genusbcovers Europe, Asia, Africa, Australasia, and North America. This plant grows in different regions of Iran's provinces such as Isfahan, Chaharmahal and Bakhtiari, and Lorestan. In traditional medicine, this herb is considered as anti-pain, anti-neuralgia, antioxidant, antipyretic, and appetizer[62].

Nat Prod Res. 2012;26(18):1676-81. doi: 10.1080/14786419.2011.613384. Epub 2011 Oct 20.
Essential oil composition and antioxidant activity of Stachys sylvatica L. (Lamiaceae) from different wild populations in Kosovo. Hajdari A1, Novak J, Mustafa B, Franz C. Leaves and inflorescences of Stachys sylvatica L. (Lamiaceae) were collected from three different wild populations in Kosovo to study the natural variation of the chemical composition of essential oils, total flavonoids, total phenolics and the antioxidant activity. Essential oils were obtained by steam distillation and analysed by GC-FID and GC-MS, whereas total flavonoids, total phenolics and antioxidant activities were determined by spectrophotometric methods. Yields of essential oils ranged from 0.001% to 0.007% (v per dry weight). Twenty-eight volatile constituents were identified. The main constituents were α-pinene, β-pinene and germacrene-D. Total phenolics ranged from 39.3 to 70.8 mg g⁻¹ dry mass, whereas total flavonoid content ranged from 30.44 to 70.63 mg g⁻¹ dm. The antioxidant activity, as measured by the DPPH method, exhibited a rather high degree of activity ranging from 25.5% to 57.2%, whereas the FRAP antioxidant activity showed a lower variability and ranged from 93 to 133.4 mg g⁻¹ dm.

In December 2017 overleden James A. Duke. 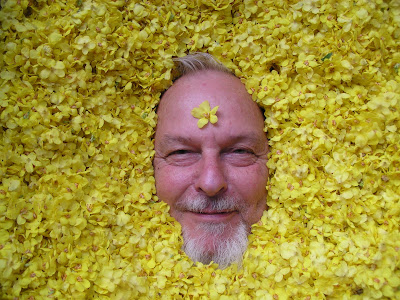 The worlds of ethnobotany and herbal medicine have lost one of their truest and strongest champions with the passing of Jim Duke, PhD, at age 88 in December 2017. Jim was one of the most prolific and influential people in the modern herbal medicine scene and was respected by scientists, herbalists, and the many thousands of readers of his books and articles.

I met Jim at the first Herb Trade Association symposium in Santa Cruz, California, in the spring of 1977. Over the years, he sent me large manila envelopes full of photocopied botanical research articles from the US Department of Agriculture (USDA) addressed to “Dr. Mark Blumenthal” so he could use the USDA’s franking privileges (free mail for government employees). Jim was the first person who consistently, and jokingly, referred to me as “Doctor.” (I do not have a formal advanced degree, like many of my herbal brothers and sisters.) Jim was one of my most influential mentors and exhibited a passion for all vascular plants, their myriad properties, and their countless benefits for indigenous peoples as well as those in developed societies — the stuff of ethnobotany.

I am profoundly grateful to have known and learned from him, and that he supported my efforts to start and build ABC. He was one of the first three board members when ABC was founded in November 1988, along with the late Professor Norman Farnsworth, PhD, a respected pharmacognosist, and me. (The esteemed Professor Varro Tyler, PhD, joined the board a few years later.) Until his passing, Jim remained on the ABC Board of Trustees as the Director Emeritus, or “Director Demeritus,” as he frequently referred to it in his usual way of wryly twisting language.

We took numerous trips together to the Peruvian Amazon and Andean highlands, as well as Belize, Costa Rica, Kenya, and South Africa. We even found ourselves hanging out in Seoul, South Korea, at the 3rd International Ginseng Symposium in 1980.

I have so many fond memories of Jim; here are but a few:

His singing and playing a beat-up Spanish guitar in the screened-in bar at Explorama Lodge on the Amazon, downriver from Iquitos, Peru. (On many trips to Amazonia, he would take a beat-up acoustic guitar and leave it there for the locals.)

Drinking the crude aguardiente rum distilled from the fermented sugarcane juice, which was squeezed out of the caña (sugarcane) by a primitive press powered by an ox that tread a well-worn circular path on the bank of the Amazon near Explorama.

Eating suri — the nutritious larvae of the South American palm weevil — at a rustic, no-frills camp on the Napo River. (Being omnivorous, he ate the suri; being vegetarian, I did not.)

His “Dukeisms”: Jim’s well-known wordplay (e.g., as in the double entendre “Herbalbum,” his anthology of “Varicose Verse,” and his book Lewd Latin Lexicon) and stream-of-consciousness emails (Steven Foster, an inveterate and unrepentant archivist, has collected hundreds of them). He penned articles for HerbalGram when it was still a newsletter in the early- to mid-80s, and I enjoyed the challenge of editing his often-poetic prose.

We extend our deep gratitude to Helen Lowe Metzman for her contribution to this issue, and to Jim’s life. Helen is the chief gardener at Jim and his wife Peggy’s six-acre Herbal Vineyard at their home in rural Maryland, and was Jim’s right-hand helper for the past decade. The day after Jim passed over, Helen sat down at his desk and wrote a heartfelt tribute on his old desktop computer. We include Helen’s account in our special section devoted to Jim.

To provide a detailed insight into Jim’s professional life and publications, Steven Foster, botanist, author, and co-author of one of Jim’s most popular books (Peterson Field Guide to Medicinal Plants and Herbs of Eastern and Central North America) has written what will no doubt become the definitive summary of Jim’s many botanical accomplishments. Included in Steven’s compelling 7,000-plus-word article is the story of how Jim documented the potential adverse effects of the proposed use of nuclear weapons in the 1960s to create a new Panama Canal on the plants, environment, and native peoples of the region. Jim spent a considerable amount of time in Panama inventorying the plants of the rainforest and befriending the local people.

I’ve never known anyone like Jim Duke, and I know that my life and the lives of so many others who respected, admired, and loved him are immensely richer for having known him. Whether you knew Jim or not, you will enjoy reading Helen and Steven’s tributes to him in our 18-page spread with colorful photos and stories of the man who helped propel herbal medicine in ways that can never be fully measured.
Gepost door KruidWis op 10:27 Geen opmerkingen:

Over Plantago lanceolata of smalle weegbree. 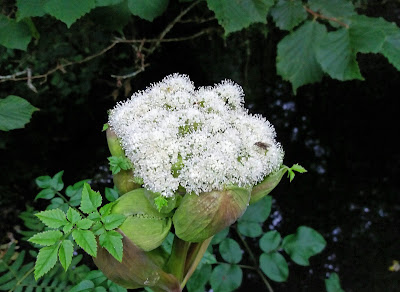 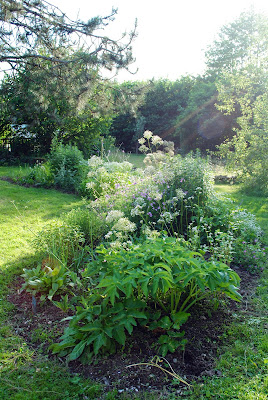